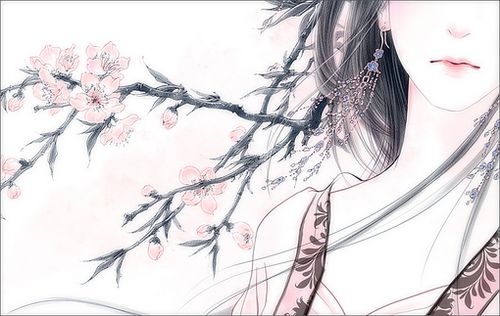 The news of Young Master Nan Yi bringing back his soon-to-be-wife, very quickly spreads throughout every corner of the sect, the sect members that harboured hopeful dreams all cried to the heavens and knocked their heads on the ground, shedding innumerable bitter tears that flowed into a little river. Amongst the sound of hearts breaking one by one, only the chef in charge of the meals was overjoyed, they say that for these few days, there is no need to add salt when cooking noodles, no need to prepare the sour dipping for dumplings, hence saving a lot money.

“The yesterday that abandoned me and left, cannot be retained; the today that leaves my heart in disorder, causes many worries.”[1]

Pang Wan once again starts humming to this tune.

The female leads produced in the land of Mary Sue are generally multi-talented, mere poetry and singing, she naturally has a grasp of.

“To think Sheng Gu’s feelings towards Young Master is actually this deep!”

The third time hearing Pang Wan recite this poem, Rong Gu-Gu explodes, she throws aside the pearl flower ornament and smacks the table as she rises: “Rong-er shall go chop off the head of this Mei Wu right now, bringing it back to Sheng Gu!”

“Sheng Gu ah Sheng Gu, in fact, you need not be so heartbroken, since the ancient times, the bigger named figures, would always need to encounter some setbacks.”

Rong Gu-Gu hovers over her, grabbing a golden sandalwood comb, combing along her hair without much effort.

“Like those that go down in history as demonesses of evil sects, which one isn’t a heavenly deity in appearance, demon at heart? No heart no feelings, even able to remain emotionless when killing their closest loved ones. Rong-er believes that, Sheng Gu getting ditched by Young Master this time is a good thing, perhaps this wound will hit you with enlightenment, to remove your feelings and cut off love, thus making a one-swoop breakthrough of the ninth level in Xi Sui Jing, obtaining higher cultivation……”

Pang Wan originally wanted to say, my ambition is to be blessed with the endless love of pretty men, not to become an endangered old nun, but in the very end, she only refutes with the words: “I did not get ditched by that little tyrant!”

Having said that, she buries her face into her knees, falling into a gloomy mood.

Rong Gu-Gu grew amused by her distressed girl in love attitude, pinching the silky smooth ears of the person in front of her: “Then what is Sheng Gu not happy about ah?”

Pang Wan does not say anything.

In reality, she too does not know why she is so unhappy.

Because Nan Yi brought back a bride without a word?

Because in these past six years, a part of her heart had actually hoped for Nan Yi?

Or is it because, she suddenly thought of, the brutal reality that she may, by a chance in million, not be the female lead?

——all in all, she is very confused right now.

Just as she was thinking all over the place, from the doors, there sounds the reports from the sect members, Sect Leader has arrived, and is already in the floral hall. (The floral hall is the Chinese version of a drawing room, not the living room, but another room where guests are received and entertained)

Pang Wan hurriedly jumps off the bed, rushing to the floral hall.

“Wan Wan!” Sect Leader sees her figure, and already spreads his arms from the distance.

Bai Yue Sect’s sect leader, surname Zuo , name Huai An, according to his self-introduction, he is the sworn brother of Wan Wan’s mother, hence never letting Wan Wan address him as Sect Leader, and instead call him “Uncle Zuo”.

“Wan Wan has grown up, gotten even prettier.” Sect Leader lovingly strokes her hair, like a biological father who had not seen her for a long time, “How has your martial arts training been going lately? Have you lost your killing-virginity ah?”

“N-no.” Wan Wan upon hearing the final sentence, felt a chilling shiver, her head shrinking back from the demon claws of the sect leader.

“Wan Wan, now this isn’t right of you.” Sect Leader’s expression appears a little unhappy, “The people of Bai Yue Sect must lose their killing-virginity before the age of sixteen, and then hang the head of the person at the main doors to exhibit for three days, indicating their coming of age —— Wan Wan you will be reaching sixteen years of age very soon, this matter cannot be dragged on ah!”

Pang Wan only nods without saying a word, inside her heart, it feels like the water of grievances is wa-la-la flowing out —— what kind of a sin have I committed here? To actually be allocated into such a looney environment, wait till I complete the mission of my lifetime here, I must go back to bribe the Mother Goddess of Creation……

Up to now, she still believes she is living in the land of Mary Sue.

“Ha-ha, no more ushering, no more ushering!” Sect Leader heartily laughs out loud, “Wan Wan must be troubled, what kind of huge figure known to the world to kill? Uncle believes, Wan Wan certainly wouldn’t disappoint the expectations of everyone in the sect!”

Pang Wan’s heart ceaselessly cries its grievances, yet her face barely squeezes out a smile.

Within a blur of moment, a young lady steps out from behind the sect leader, her body bowed, slowly coming up to Wan Wan with light steps.

That young girl performs a wan fu bow towards Pang Wan, raising her head to radiantly look towards her. (Wan fu bow 万福礼 – a greeting by women, whereby they fold their hands on the lower right side. A gesture that symbolises, wishing you happiness and good luck)

One glance, just one glance, sometimes, the enemy that defeats you, needs only one glance.

There is a type of woman in the world, that can leave you ashamed after seeing them, such type of woman is beautiful to the point they can completely stop the flow of social trends —— they are too beautiful, too great, so great that no one has the courage to wear clothes similar to theirs, comb hair into similar styles as theirs; even by wearing the same colour as them, girls will be upset by the fact that this type of woman is like the cloud in the sky whereas rest of the girls are like the dirt on the ground.

The difference between a heavenly deity and a mere mortal, the mortal human is clearly aware of.

“Lady Mei is too courteous.”

She knows that she should further say courteous words to praise Mei Wu’s beautiful appearance, but her heart and mind is troubled, and truly cannot bring herself to say anything.

——she started to think, could it be I’m really just a supporting female, and this Lady Mei is the true protagonist? Look at how beautiful and pure she is, looking just like a heavenly deity, even her name is in particularly flowy and elegant, unlike mine, so common and dull, fat and curvy? (Fat and curvy is pronounced – pàng wān wān)

Seeing Wan Wan appear to have received a heavy blow, several sect members who were bored to death, starts to exchange glances and whisper amongst themselves.

——ey, the two grown up together since young, who would have thought Young Master would come back with his other half after descending the mountain, if I was Sheng Gu, I would already have cried to death.

——the crucial point is that the love rival is so good looking, giving no chance to fight back even if she wants to……

——what do you mean no chance! I feel that Sheng Gu should charge head on, destroy that little wench’s face!

That final comment had clearly been spoken by a certain female sect member who held strong feelings for Nan Yi only for everything to shatter.

Pang Wan takes all these comments into the ear, her head filled with a noisily jumbled up mess, heart feeling even more in distress.

Right as she was feeling gloomy, her hands were suddenly grabbed hold of.

“Wan Wan!” Sect Leader holds both her hands, face looking very serious, “Nan Yi that child does not know any better, suddenly came running back three days ago, saying he wants to marry this lady.” He deliberately pauses, eyes sharply glancing at Mei Wu beside him.

Mei Wu’s body trembled, seeming afraid, but then immediately upholds herself as she stands straight.

Sure has a backbone ah, Pang Wan inwardly assesses.

“Wan Wan, even though five years ago, Uncle had said to Nan Yi, as long as he cultivates his martial arts well, carrying our Bai Yue Sect forward, I shall definitely not interfere with his personal matters, even if he likes eunuchs, but this time……”

“As long as Wan Wan says he cannot marry, I shall definitely not allow that insolent rascal to marry any other lady into the family!”

With one sound of bi~, the entire mountain valley was rendered silent.

“As long as Wan Wan says he cannot marry!”

“As long as Wan Wan says he cannot marry!”

Within a moment, across the mountains and plains, all that can be heard is the strong resonant echo of Sect Leader’s roar.

Pang Wan blanked out for a good while.

And then, she sees Mei Wu silently bowing her head in the corner, she was biting her paled lips, crystal clear droplets glistening on her cheeks.

Looking at Zuo Huai An whose face is filled with utmost seriousness, Pang Wan intimately holds onto his arm, playfully batting her eyes.

“Brother Nan Yi has lived for eighteen years already, since it’s rare of him to like a lady, should we not go in accordance with him this time, who knows if that great demon would turn the world upside down?”

She does not wait for Zuo Huai An’s reply, and immediately turns her head back to Mei Wu, crisply calling out “sister-in-law”.

Her voice truly sounds sticky yet soft, and is even capable of melting the ice.

Mei Wu freezes on the spot, eyes still containing traces of tears, as though she dares not to believe her own ears.

Presumably, the development of this matter was different from what he had expected.

Only Rong Gu-Gu, the kind and understanding Rong Gu-Gu, walked up and gave Pang Wan a pat on the shoulder.

“The yesterday that abandoned me and left, cannot be retained.”[1]

Rong Gu-Gu softly says beside her ear, blinking her eyes, she meaningfully smiles.