This little snippet is taken out from another novel by the author which has actually been dropped, so it will be a little confusing to read in that we are not familiar with the characters of this novel, nor do we know what is going on, all we know is that this takes place around one hundred years later with GW’s story being passed down from generations to generations, like a folk tale. 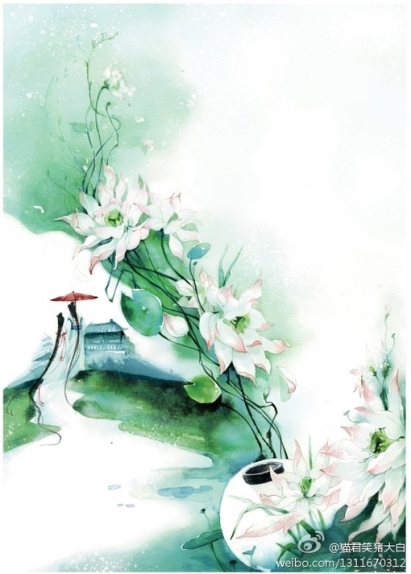 Three large canopy stands under the parasol tree, the two closest to the tree was already fully seated with people, the three people chooses the most far sided table, having just seated themselves, they hear a burst of applaud from the audience. That little boy raises his head, Jiang Hou Er has just spoken up to the climax, making a sudden turn up on the tree branch, winning the crowd’s cheer.

“……Du Cheng has only twenty thousand military force, only after the city defence had held up to the twenty third day, did the Nu King discover Madam Lou above the city walls, think about it ah, originally a great foundation destroyed by one woman just like that, how could he not be angry, thus raising the bow and arrow in hand, shooting it out towards Madam Lou who was on the city tower. All of you take a little guess, did that shot hit her or not?” Jiang Hou Er casually sits on the tree branch, whilst nodding his head, asking those enjoying their tea in the canopy stands below.

“That Madam Lou is a great heroine, and is even more a beauty that can overthrow cities, it’s not like that Nu King is blind, how could he bear to shoot her, from what I see ah, that arrow must have shot wide.” A big burly man in brown commoner’s clothing had just been taking a drink of tea, and hears this question, rushing to speak up first. Everyone upon hearing this, feels that that burly man’s words, although a little inappropriate, but the meaning is very reasonable, just as they had thought so themselves, everyone unanimously agrees with a public outcry of laughter.

That little boy upon hearing up to here, withdraws his line of sight, mumbling: “Ignorance……” Once the gentleman in green clothing hears this, he faintly says: “Could it be you know what happens after this?”

“That is natural, I am but of Zong Lu Tang……” Once the words are spoken, he is suddenly alerted, glaring at the other person, “You’re trying to ease me into speaking again.” So this clever little boy is Zong Lu Tang’s Elder Qing Yi’s disciple, Xiao Ke.

The one dressed as a gentleman in green is Shu Yi, she looks into the shades of the parasol tree, without even turning her head, she casts aside a few words: “I’d say you don’t even know either, this matter already happened a hundred years ago, if it is your teacher telling me, I would believe it more.”

Xiao Ke’s face darkens, muffled, scratching his head, with a straightforward temperament, he cannot resist provocation the most, mood always revealed in his face, Shu Yi notices this little point, deliberately choosing to ignore it, soon after, Xiao Ke could no longer hold back, lowly speaking: “This story, every one of us Zong Lu Tang disciples knows of it.” Shu Yi turns her head without much of a care: “Oh?” Shu Yi quietly sits to the side, regarding the two people’s conversation, she seems to not mind at all, that clear and handsome face as cold as snow.

Xiao Ke looks at Shu Yi, then looks at Shu Xuan. A type of anger caused by neglect surges up his heart: “Of course I know. Nu King under a moment of rage, shot out the arrow, how is there the reasoning of him missing? At the time, although with all the generals, the military advisor at the side, not one of them was not taking notice of the movements from the reinforcements, no one was aware of the unusualness below the city, even if they did notice, just who is able to act faster than an arrow, that one arrow, indeed struck down Madam Lou.”

Shu Yi shallowly smiles: “That being said, then that Madam died above the city tower?”

“No,” The worker comes with two pots of herbal tea, Xiao Ke hurriedly pours himself a full cup, before finally speaking again, “Perhaps the Nu King unconsciously left a few points of mercy, Madam Lou was indeed struck by an arrow, but did not die, only suffered a serious injury. At the time, Lord Prime Minister Lou was amongst the reinforcements, witnessing this scene, he was driven mad with a grieving heart, waiting for the Nu King to withdraw his troops, Lord Prime Minister Lou sent for people to look all over for famed physicians and famed herbs in order to cure Madam, later when the armies were engaging in war, Lord Prime Minister feared his past political enemies will come forward to inflict harm, thus disappeared from the government and public along with Madam, during the later years after that, he operated a herbal business amongst the commoners, conveniently managing news within his business network.”

Shu Yi takes a sip of herbal tea, she looks at Xiao Ke who had just finished his storytelling, saying: “This should be the origin of ‘Zong Lu Tang” right? Originally founded to gather intelligence and herbs, after a hundred years of growth, it became today’s standalone sect. I heard Zong Lu Tong was founded by a woman named Du San Niang, a hundred years ago, by that Madam Lou’s side, was there not one called San Niang?” Within her eyes, something settles, vaguely deep and heavy, as she slowly says, “That’s why, every disciple of Zong Lu Tang knows of this story.”